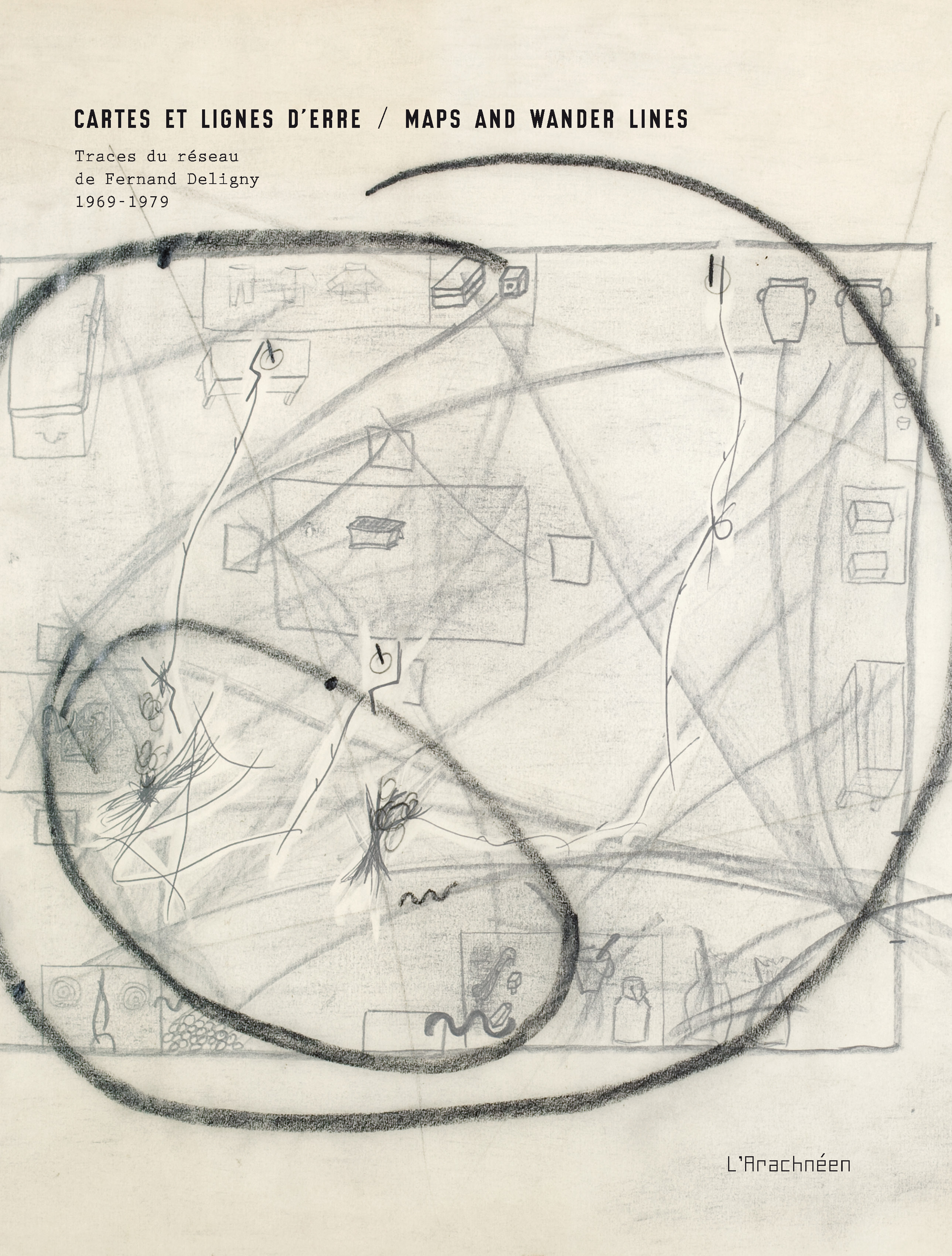 Descriptions by Sandra Alvarez de Toledo
transcribed from interviews with the authors of the maps.

About
Extracts
Exhibitions
In French
Maps and Wander Lines

In 1968, Fernand Deligny created a network to care for autistic children at Monoblet in the Cévennes. A few years later (1975-1976), he dedicated three issues of the journal Recherches, which had been created by Félix Guattari, to describe this experiment, which he conducted at the margins of educational and psychiatric institutions. Deligny was not a psychiatrist. In fact, he preferred to call the children mute rather than autistic. At a time when the treatment of infantile autism remained under-developed, he offered a milieu de vie (a living environment) organized into aires de séjour (living areas) where the children lived the coutumier(the customary) in the presence of non-professional adults who included workers, farmers, and students. He invited these educators/non-educators, whom he calledprésences proches (close presences) to transcribe the children’s movements and gestures. In each aire de séjour–which were approximately fifteen kilometers apart—and for ten years, day after day (in the evenings or the following day, sometimes several days later), the adults traced maps on which they marked their own journeys and then, on tracing paper, the children’s lignes d’erre (wander lines): “For nothing, for seeing, so as not to have to talk about them, those children—there, to elude first and last names, to thwart the artifices of the ‘HE’ as soon as the Other is spoken.” These maps did not help to understand or interpret stereotypies, but to “see” what could not be seen with the naked eye, the coincidences or chevêtres(lignes d’erre that intersected at a precise point, indicating that markers, and a commons, had developed), the improvements needed to the arrangement of the space, the role of usual objects in the children’s initiatives, their degree of participation in each customary task as the days passed, the effect of an adult’sgeste pour rien (a gesture “for nothing”—a sign or an additional marker, for example) on them. 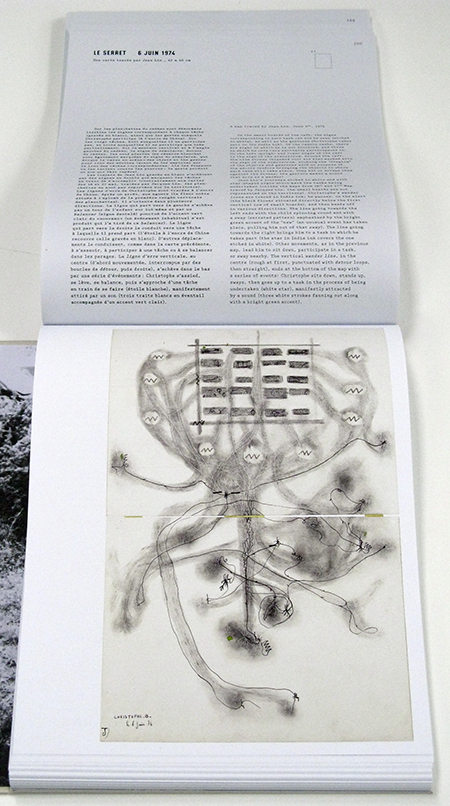 The book assembles nearly two hundred maps that Gisèle Durand and Jacques Lin, Deligny’s fellow travelers, found in the archives in 2010. It comprises eleven chapters or sections, organized chronologically and by aires de séjour. From one place to another, different hands did the tracing: Jacques Lin’s and Gisèle Durand’s styles are not the same as those of Marie-Dominique Vasseur, Thierry Bazzana, or Nicole Guy. The modes of transcription also change: over time, the graphic vocabulary becomes richer and highly—at times perhaps too highly—abstract (as did the high degree of speculation of Deligny’s research), then returns to a simpler, more legible tracing. Still, the same principles inspired the maps’ authors: becoming freed of themselves through writing, and recording the traces of l’humain de nature(the human by nature) that Deligny saw as persisting wherever language was withdrawn.

Superimposing tracing paper caused a centripetal territory to appear inside which the children circulated in every direction, drawn by presences, gestures, objects, or nodes of life. The outline of the journeys and lignes d’erre suggest that there were particular locations to which children kept returning to post themselves or lieux chevêtres (intersections), places where the presence of an adult was conjoined to a task in the process of being performed. Objects were interspersed throughout the territory: objects pour rien (for nothing) that the children transported through the space and put into motion; daily objects distanced from their usual functions; and objects that served purely as markers, in the same way as people. The aire de séjour thus resembles something like an appareil à repérer (a spotting apparatus), a coherent, rhythmic space. The principle of the “object notebook” makes it possible to leaf through the pages or “shuffle the cards ” (in Deligny’s words) while also reading the corresponding description higher on the page. These minutely detailed descriptions, based on interviews with the maps’ authors, have an explicit, even polemical purpose: They are intended to show concretely what the lignes d’erre were, to emphasize a practice founded on a speculative approach to language and to the human, of course, but also establish this practice in the context of a highly specific material organization. This was a means of dissuading the instantly theorized approaches that began to flourish, in particular in the wake of Gilles Deleuze’s and Félix Guattari’s notion of the rhizome.

The rediscovery of these maps raises the question of autism but even more importantly that of institutional invention within a common space (see Bertrand Ogilvie’s essay on this subject), of a terrain for exchange (and even of play) that lies outside of the social rules and categories of the normal and the pathological. The radical strangeness of these particular children, who “inhabit the world without inhabiting it […], do not come to terms with our world,” has given rise to these maps whose status is indefinable and which ensured over a period of ten years the bond between territories entirely made of gestures and mute circulations, and Deligny’s speculations, between a world outside of language and his attempt to elucidate it through the unending work of writing.

The book is bilingual and includes a glossary in which Fernand Deligny’s vocabulary is defined. 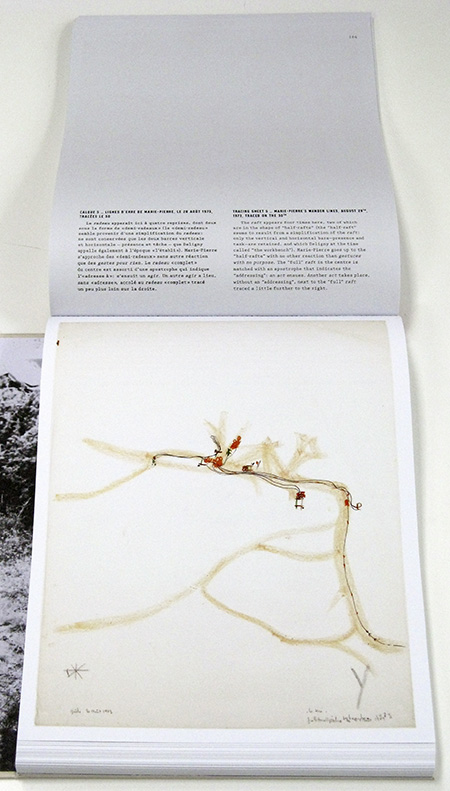